All topics are updated as new evidence becomes available and our peer review process is complete.
Literature review current through: Sep 2020. | This topic last updated: Jun 05, 2020.

The gene responsible for CHS is called Beige in mice because it was first discovered in a mouse model with an altered «beige» coat color [6-9]. This mouse model has been an important source of information on the disease. The mouse gene and the defective human gene, called lysosomal trafficking regulator (CHS1/LYST), are part of the BEACH (Beige and Chediak-Higashi) family of vesicle trafficking regulatory proteins.

The diagnosis of CHS is suggested by pathognomonic giant cytoplasmic granules in leukocytes and platelets on a peripheral smear and is confirmed by identification of a pathogenic variant in the CHS1/LYST gene. Allogeneic hematopoietic cell transplantation (HCT) is the treatment of choice.

EPIDEMIOLOGYCHS is a rare disorder, with an estimated incidence of <1 in 1,000,000. Less than 500 cases have been reported worldwide [6].

PATHOGENESISThe underlying defect in CHS is abnormal organellar protein trafficking that leads to aberrant fusion of vesicles and failure to transport lysosomes to the appropriate site of action [7]. This defect is due to a mutation in the CHS1/LYST gene at 1q42.1-2 (MIM #214500) [8,9]. Most reported mutations are nonsense or null mutations, resulting in an absent CHS1/LYST protein [1]. A genotype-phenotype relationship appears to exist, with milder forms of CHS associated with missense mutations that probably encode a protein with residual function [1].

The CHS1/LYST protein is widely expressed in the cytosol [7]. CHS is critical for regulating size and trafficking of lysosomes by membrane fusion and fission. Studies have also suggested that the biochemical defect in CHS is due to decreased levels of protein kinase C [10]. Aberrant cortical actin density and granule size are (at least partially) causative for the cytotoxic defect by inhibiting lytic granule release [11].

Altered lysosomes/granules are found in all cell types in CHS and are the hallmark of the disease (picture 1):

●Melanocytes contain enlarged pigment granules (melanosomes) that are not appropriately transferred to keratinocytes or epithelial cells, resulting in a variable degree of oculocutaneous albinism [12,13].

●Neutrophils have giant azurophilic granules [14], and cytotoxic T cells have enlarged mature secretory cytolytic granules [15,16]. These abnormal granules do not appropriately release their contents in the setting of bacterial or viral infections, leading to impaired bactericidal and cytotoxic function. Neutrophils also have impaired chemotaxis [17].

●The number of platelet-dense bodies (serotonin-storage granules) is significantly reduced, resulting in a platelet storage pool deficiency and bleeding diathesis [18,19].

●Plasma membrane repair, which is a lysosome-mediated process, is also impaired [20].

Immunodeficiency with predominantly bacterial infections — Pyogenic infections are frequent, severe, and related to the neutrophil dysfunction characteristic of CHS (see ‘Pathogenesis’ above). The most common sites of infection are the skin, respiratory tract, and mucous membranes. Cutaneous infections range from superficial pyoderma to deep abscesses and ulcerations [24]. The deeper lesions heal slowly and leave atrophic scars. The most common causative organism is Staphylococcus aureus. Streptococcus pyogenes and Pneumococcus species are other common infectious organisms in CHS.

Coagulation defects — Patients have a mild coagulation defect that results in easy bruising and abnormal bleeding, especially of mucosal tissue [18,19]. Bleeding may become more severe in patients who have developed HLH. Hepatosplenomegaly and lymphadenopathy are common and become more pronounced with HLH. (See ‘Hemophagocytic lymphohistiocytosis/accelerated phase’ below.)

Other disease manifestations — Gingivitis, oral ulcerations, and periodontal disease are common [25,26]. Defective Toll-like receptor (TLR) expression and function, in particular TLR2/4, may underlie immune dysregulation and influence periodontal disease [27]. Enterocolitis has also been reported [28]. Renal function impairment is reported in animals with the disease [29], and renal giant cytoplasmic inclusion has been reported in ultrastructural studies of human patients [30], although impaired renal function is not a characteristic feature in CHS patients.

Patients with HLH present with fever, increased hepatosplenomegaly and lymphadenopathy, and worsened pancytopenia and bleeding. This phase occurs in more than 80 percent of patients and is usually lethal. As with other genetically determined forms of HLH (primary/familial HLH), onset of disease is typically triggered by viral infections, particularly the Epstein-Barr virus [7,39,40]. The characteristic lack of natural killer (NK) cell function in CHS, but also abnormal surface expression of cytotoxic T lymphocyte-associated antigen 4 (CTLA-4) [41] and reduced cytotoxic T lymphocyte (CTL) and NK cell cytotoxicity [38], predispose to development of HLH with viral infections.

LABORATORY AND IMAGING FINDINGSNeutropenia is a common laboratory finding and is probably due to intramedullary destruction of neutrophils [42]. Neutrophils and monocytes have decreased chemotactic responses [17]. Intracellular killing of bacteria is also impaired [43]. Natural killer (NK) cells are present, but NK cytotoxicity is nearly absent [44]. Antibody-dependent cellular cytotoxicity is also decreased [15]. B cell function is usually normal [45]. Hypergammaglobulinemia is often seen secondary to frequent infections [46].

Patients with CHS have abnormal platelet aggregation and bleeding time [18,19]. Thrombocytopenia is common in patients with hemophagocytic lymphohistiocytosis (HLH).

DIAGNOSISThe diagnosis of CHS is typically suspected in patients with partial oculocutaneous albinism and recurrent pyogenic infections and is made by examining a peripheral blood smear for the classic giant azurophilic granules in neutrophils, eosinophils, and other granulocytes (picture 1 and picture 3). These large granules are found in all granule-containing cells, including peripheral blood and bone marrow cells, melanocytes, peripheral and central nerve tissue, renal tubular epithelium, fibroblasts, and gastric mucosa [50,51].

Definitive diagnosis is based upon genetic testing for mutations in the CHS1/LYST gene. The gene is large, and most mutations are unique. Thus, identifying the exact mutation and differentiating true disease-causing mutations from benign genetic variants can be a challenge.

The diagnostic criteria for CHS in patients who present with hemophagocytic lymphohistiocytosis (HLH) are the same as for HLH due to other primary genetic defects and include five out of the following eight criteria: fever; splenomegaly; cytopenia in at least two lineages in peripheral blood; hypertriglyceridemia and/or hypofibrinogenemia; hemophagocytosis in bone marrow, spleen, or lymph nodes; low or absent natural killer (NK) cell activity; hyperferritinemia; and high levels of soluble interleukin (IL) 2 receptor [52]. The diagnosis of HLH is reviewed in greater detail separately. (See «Clinical features and diagnosis of hemophagocytic lymphohistiocytosis», section on ‘Diagnosis’.)

As for other genetic diseases, prenatal diagnosis is possible and is commonly performed by capillary sequencing of the CHS1/LYST gene.

DIFFERENTIAL DIAGNOSISThere are several other rare disorders combining both partial albinism and immunodeficiency that are in the differential diagnosis. These include Griscelli syndrome and Hermansky-Pudlak syndromes (HPS). Several features including neurologic symptoms prior to hemophagocytic lymphohistiocytosis (HLH) onset (particularly peripheral neuropathy) and giant intracellular granules in leukocytes are characteristic of CHS but are not seen in these other conditions. However, genetic testing is strongly recommended to differentiate these rare disorders since they have partial phenotypic overlap and treatment is not identical.

●Other conditions combining partial albinism and immunodeficiency – Another condition in the differential diagnosis is deficiency of the endosomal adaptor protein (mitogen-activated protein binding protein interacting protein [MAPBPIP]) encoded by the late endosomal/lysosomal adaptor, MAPK and mTOR activator 2 (LAMTOR2) gene [64]. Features in this disorder not seen in CHS include short stature and coarse facial features.

TREATMENTThe initial treatment of CHS includes prophylactic antibiotics and aggressive therapy for acute bacterial infections (see «Primary immunodeficiency: Overview of management»). Other pretransplant therapies include granulocyte colony stimulating factor (G-CSF) to correct neutropenia and decrease infection [65] and interferon gamma, which may partially restore function of natural killer (NK) cells. Allogeneic hematopoietic cell transplantation (HCT), including cord blood transplant, is the treatment of choice to correct the immunologic and hematologic manifestations of CHS, although it does not prevent the progressive neurologic deterioration or the oculocutaneous albinism [47,66,67].

A deficiency or deterioration of cytotoxic T cell function may predispose to hemophagocytic lymphohistiocytosis (HLH) and is of use in determining the need for early HCT [38]. HLH treatment in patients with CHS follows the same clinical protocols for familial/primary HLH, such as the HLH2004 protocol. Although systematic data are lacking, it is assumed that the outcome of HCT depends upon prior infections and whether HLH has developed in an individual patient. Thus, early, preemptive HCT is preferred, in particular when a matched sibling or unrelated donor is available. Successful HCT with donor immune reconstitution will normalize the risk of infection-triggered HLH. (See «Treatment and prognosis of hemophagocytic lymphohistiocytosis».)

High-dose glucocorticoids and splenectomy have been used with some success to induce a transient remission in the accelerated phase/HLH [71]. Intravenous immune globulin, antivirals (eg, acyclovir), and chemotherapy (eg, etoposide, methotrexate, vincristine) have also been used to induce transient remission of HLH [72]. However, treatment with these agents is not curative, and HLH usually recurs in a more aggressive and difficult-to-manage form.

PROGNOSISMost patients with CHS die from pyogenic infection before seven years of age if not transplanted. Hemorrhage is a less common cause of death. The five-year probability of survival posttransplantation was 62 percent in a review of 35 children with CHS [66]. However, most transplanted patients and those few patients who survive childhood without transplantation develop neurologic deficits by the time they reach their early 20s [47]. These deficits include cerebellar ataxia, with difficulty walking and loss of balance, tremor, peripheral neuropathy, and low cognitive abilities. These neurologic sequelae can be quite debilitating. (See ‘Progressive neurologic dysfunction’ above.)

●Patients who do not die from infection eventually develop HLH, characterized by massive lymphohistiocytic infiltration of virtually all organ systems. (See ‘Hemophagocytic lymphohistiocytosis/accelerated phase’ above.)

●The diagnosis is made by examination of a peripheral smear for pathognomonic giant cytoplasmic granules in leukocytes and platelets and molecular analysis of the CHS1/LYST gene. (See ‘Diagnosis’ above.)

●Hematopoietic cell transplantation (HCT) is the treatment of choice to correct the immunologic and hematologic manifestations of CHS. Treatment with HCT prevents infections and development of HLH, but patients still develop neurologic deficits, and the oculocutaneous albinism is not corrected. (See ‘Treatment’ above and ‘Prognosis’ above.)

ACKNOWLEDGMENTThe editorial staff at UpToDate would like to acknowledge Robert L Roberts, MD, PhD and Kevin Yeh-Sheng Wang, MD, LAc, who contributed as authors to earlier versions of this topic review.

The editorial staff at UpToDate would also like to acknowledge E Richard Stiehm, MD, who contributed as a Section Editor to earlier versions of this topic review.

Use of UpToDate is subject to the Subscription and License Agreement. 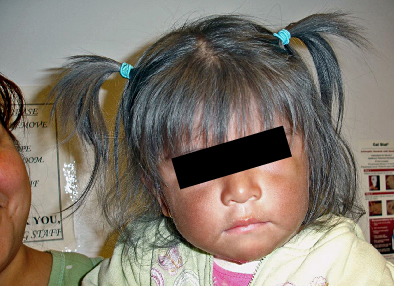 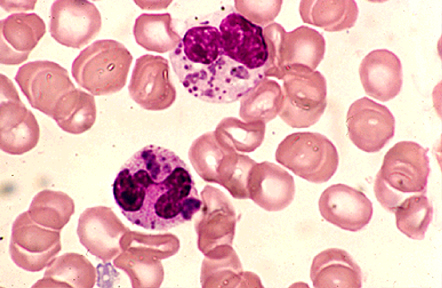 Peripheral blood smear from a patient with Chediak-Higashi syndrome shows giant granules in the cytoplasm of both a neutrophil and a band form. These granules are formed by the inappropriate fusion of lysosomes and endosomes.
Courtesy of Robert L Baehner, MD.
Graphic 71313 Version 3.0